The Department of Homeland Security has announced the formation of the Disinformation Governance Board (DGB) —charged, according to Politico, with “countering misinformation related to homeland security, focused specifically on irregular migration and Russia.” In a twist too delicious for fiction, the abbreviation for our new watchdog is DGB, one letter off from KGB. No, I don’t believe President Biden created a “Ministry of Truth.” But I am concerned about mission creep from our new DGB.

The stated goal of combating mis- and disinformation is framed to seem unobjectionable. Who objects to truth and clammers for falsehood? DGB experts will guide the way, separating the “good” information from the “bad” disinformation. But there’s one small problem with giving “truth-experts” a box of crayons to color the lines between fact, fiction, and opinion. The experts are people. And not necessarily people without their own very well-meaning agenda. But their own agenda, not the less.

Let me offer an opinion as an object lesson in truth-telling. Ready? ” I don’t believe we have enough long-term data to fully judge the effects of the COVID-19 vaccines.”

a) an anti-vaccine person

b) a Russian troll

d) a person, who understands it takes years to test, assess, and fully qualify a vaccine.

Researchers began working on a polio vaccine in the 1930s, but early attempts were unsuccessful. An effective vaccine didn’t come around until 1953 when Jonas Salk introduced his inactivated polio vaccine (IPV). I DO NOT doubt the current vaccines and I grant that we had made strides in medical science since the 1950s, however, good science takes time. Which does not mean, you should avoid taking the vaccine.

For the record, I am choice D. A older thinking man who understands that good things, even great things, sometimes take a little time. I am the cautiously optimistic guy who believes our scientists worked their butts off to give us the best science could offer in rather a dire situation without the luxury of unlimited time. Ask any of them, if they wanted more time to be certain of their creation. To man or woman, they would say, “of course!” I rest my case.

Who judges whether I can make that statement on social media? From this point forward, it seems that the DGB draws the line between free speech and disinformation. Not a good precedent. Why?

“The most effective way to destroy people is to deny and obliterate their own understanding of their history.”
― George Orwell

The United States has a spotty history with free speech in the name of national security.

In 1798, the United States stood on the brink of war with France. The Federalist Party, which advocated for a strong central government, believed that Democratic-Republican criticism of Federalist policies was disloyal and feared that “aliens,” or non-citizens, living in the United States would sympathize with the French during a war.

As a result, a Federalist-controlled Congress passed four laws, known collectively as the Alien and Sedition Acts. These laws raised the residency requirements for citizenship from 5 to 14 years, authorized the president to deport “aliens,” and permitted their arrest, imprisonment, and deportation during wartime. The Sedition Act made it a crime for American citizens to “print, utter, or publish…any false, scandalous, and malicious writing” about the government. 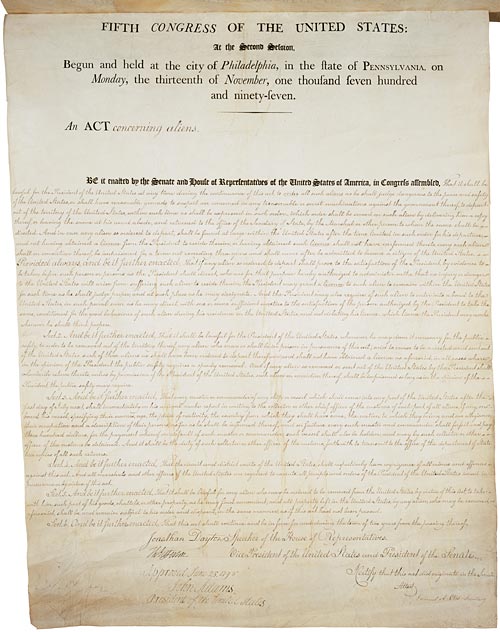 Passed in preparation for an anticipated war with France, the Alien and Sedition Acts tightened restrictions on foreign-born Americans and limited speech critical of the government. (National Archives)

Sedition Act trials, along with the Senate’s use of its contempt powers to suppress dissent, set off a firestorm of criticism against the Federalists and contributed to their defeat in the election of 1800, after which the acts were repealed or allowed to expire. The controversies surrounding them, however, provided for some of the first tests of the limits of freedom of speech and press.

On June 15, 1917, just two months after the United States entered World War I, Congress adopted the Espionage Act. The act, which was meant to define the act of espionage during wartime, put new limits on Americans’ First Amendment rights.

The Espionage Act gave the federal government increased leverage to prosecute what it considered unruly elements. Though the charge of espionage included “promot[ing] the success of [the United States’] enemies” it also encompassed a much greater swath of possible violators.

Based on the terms dictated by Congress, anyone who interfered with or attempted to undermine the United States’ war effort could be prosecuted under the law and face a 20-year prison sentence and a $10,000 fine.

Thanks to the convenient wording of the act, those who protested against newly introduced conscription, or against the war itself, became prime subjects for prosecution.

This language allowed the government to target socialists, communists, pacifists, and anarchists—all of which were opposed to the war.

The following year, 1918, Congress passed a harsh companion act to the Espionage Act known as the Sedition Act, which made it a crime to speak ill of or criticize the American government, the Constitution, and remarkably, even the national flag. Although the Sedition Act was repealed three years later, many were charged with sedition during and immediately after World War I, when fear of Communists was rampant.

One notorious example of someone being tried and convicted under the 1917 law was Eugene V. Debs, a prominent socialist and one of the founders of the International Workers of the World.

Debs condemned American involvement in the war from the start, but in 1918 he earned himself a 10-year prison sentence after delivering a speech in Canton, Ohio, in which he strongly criticized the Espionage Act.

Debs appealed his case all the way to the Supreme Court, which ultimately ruled against him. The decision to uphold Debs’s conviction was based on the precedent set by another case, Schenck v. United States, which concluded that speech with the potential to undermine society or the government was not protected under the First Amendment.

This month will mark the 100th anniversary of the act that continues to, define limits of free speech.

How many of us knew about our country’s dirty little history with free speech in times of national interest? I trust you see the slippery slope before us.

Until next time. Travel safe my friends.

During my first six decades on this earth, I lived life at great heights often on the razor’s edge. Consequently, I have enjoyed incredible successes and endured mind-numbing failures. Truthfully, I have had a hell of a view. View more posts